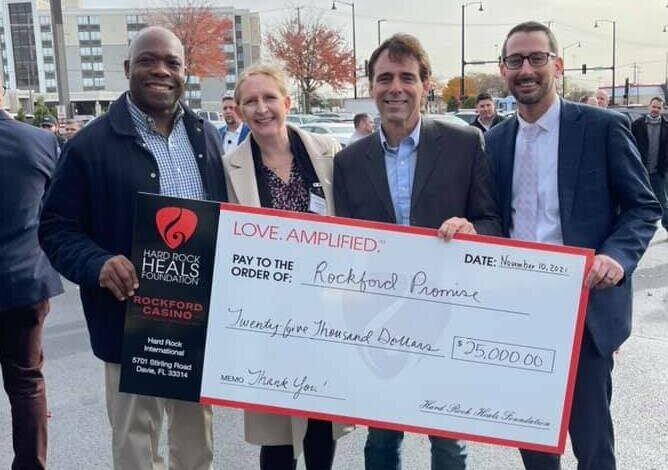 Hard Rock this month opened Rockford’s first casino in the old Giovanni’s building. That location is temporary until a larger, full-service casino is built on East State Street where the Clock Tower Resort used to be located. The new casino, being called A Hard Rock Opening Act, already employs 250. The donation officially came from Hard Rock Heals.

Although Rockford Promise thrives on donations large and small, a donation of this size is significant. It’ll fund 2 ½ scholarships in 2021-2022.

Albert Mendez, a Rockford Promise Scholar now in his first semester at Northern Illinois University, was among those attending on November 11 when Hard Rock handed over a ceremonial check.

“I was absolutely astonished (to receive the scholarship),” Mendez told WIFR, which covered the ceremony. “It was such a blessing out of the sky because for me personally there was a lot of confusion on where I wanted to go, the direction that I wanted to head and what not, but Rockford Promise just came through and they provided me with something that I’m always going to be forever grateful with.”